This memo is part of ISS Corporate Solutions’ (ICS) Client Bulletin series designed to keep you abreast of the latest trends and developments affecting governance and sustainability at corporations.

Properly constituted compensation clawback policies have the “opportunity to strengthen the transparency and quality of corporate financial statements as well as the accountability of corporate executives to their investors,” said Securities and Exchange Commission (SEC) chair Gary Gensler in his statement1 of support for the reopening2 of the comment period on this long-awaited rule.

As he noted, clawbacks – where incentive compensation is recovered from executives who have been ‘overpaid’ based on financial results that are subsequently restated – have been the law since the Sarbanes-Oxley Act of 2002. Under Sarbanes-Oxley, however, the law applied only to CEOs and CFOs and only to misconduct in the previous 12 months.

The Dodd-Frank Wall Street Reform and Consumer Protection Act in 2008 extended coverage, requiring that, if a company has to revise its financial statements, executives should have to “give back compensation paid in the three years leading up to the restatement that was based on the misstated financials — regardless of whether the misstatement was due to fraud, errors, or any other factor,” said Gensler.

The original rules were proposed in July 2015 but were never taken up. The new comment period allows interested parties further opportunity to offer their opinions here for thirty days from reopening on October 14 this year.

As a reminder, the proposed rules required the exchanges to establish listing standards that would require companies to implement a clawback policy that provided for the recovery of incentive pay based on financial targets received by current or former executive officers in the three years prior to a restatement. As Chair Gensler noted above, unlike the Sarbanes-Oxley clawbacks, the Dodd-Frank rule is ‘no-fault,’ in other words the clawback is required whether the executive was responsible for the misstated financial statements or even whether any misconduct occurred. The rules also require full disclosure of the policy; companies are not allowed to indemnify executive officers against clawbacks.

In addition to disclosing the policy, companies must also disclose the amount of incentive pay recovered, and from whom, as well as any additional recoverable compensation that remains to be clawed back in future fiscal years. Finally, any officers from whom bonuses and equity-based incentives were not recovered must also be identified, as well as why the pay was not clawed back.

As is usual in an SEC release, the Commission outlines a number of areas that are likely to be the subject of comments, some as a result of developments since 2015. For example, one reason for comment was that the initial definition of a restatement contained a materiality standard that some earlier commenters felt was being abused by companies who were claiming that restatements were not material so they could avoid clawing back compensation.

Also, there was some confusion as to how to establish the date to start the three-year lookback period; should it be the date of filing the restatement or the date the board first became aware of the errors, or some other calculated date. The initial rule contained a “reasonably should have concluded” clause, in other words a date on which it could be reasonably concluded that the board became aware of the need for a restatement. Such a phrase, noted the Commission, would be likely introduce a complex set of assumptions that could ‘reasonably’ be challenged.

Since it is possible that the materiality requirement will be dropped altogether, meaning that all required restatements could lead to a clawback, the Commission is suggesting that it might be more appropriate to rely on existing guidance and definitions of accounting errors rather than try to come up with new definitions of “accounting restatement” and “material non-compliance.”

The Commission also asks if there are any other disclosures that would be useful to investors in explaining restatements or decisions as to whether or not to claw back compensation. Because the current required filing document for restatements would not cover restatements that were not considered ‘material, a new type of filing might be necessary. Other disclosures might also benefit investors, such as how companies calculated the recoverable amount.

As can be seen from the chart below, many companies have already adopted some form of clawback policy, and the Commission is interested in an analysis of the costs and benefits of the different circumstances companies find themselves in. Some companies with policies that substantially copy the Dodd-Frank requirement could easily modify them to match the new, proposed rules, but others have quite different policies or none at all, so costs would likely be higher. From the chart, it would seem that the costs would affect smaller companies disproportionately as fewer of them have taken up the rule. 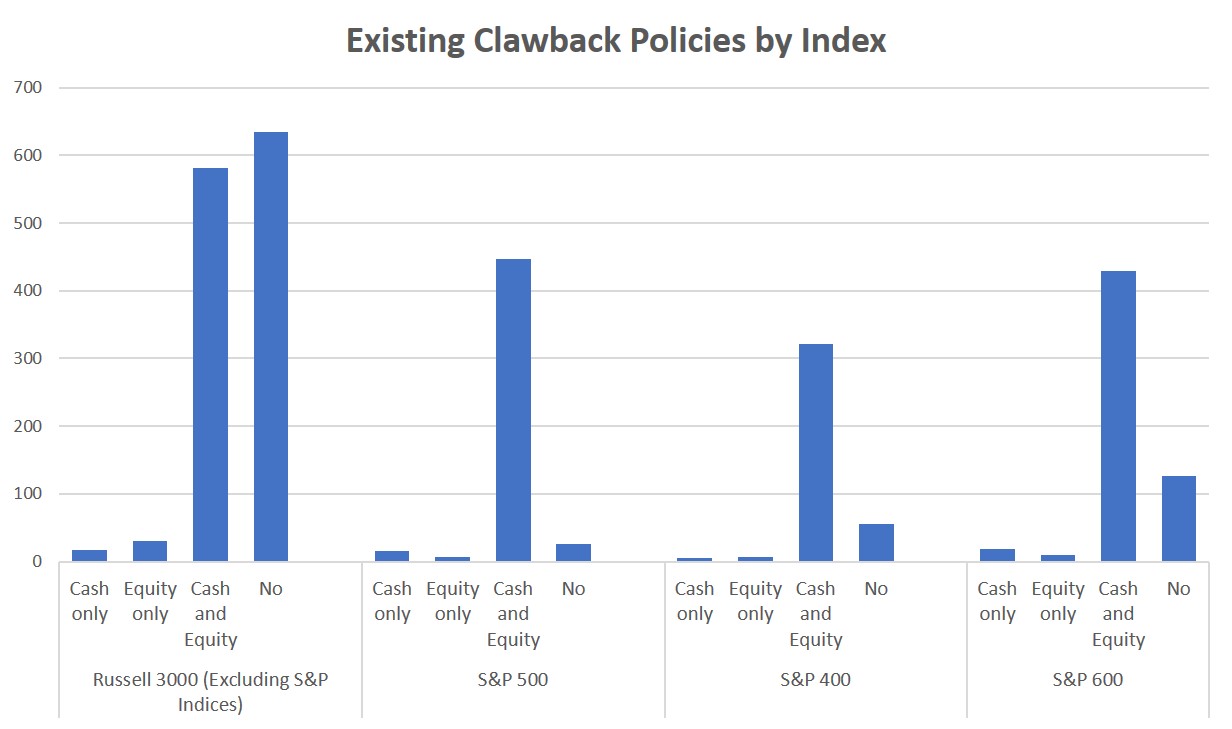 Some 842 companies in the Russell 3000 have no form of clawback arrangement at all, while an additional 79 have a clawback policy that does not meet Dodd-Frank requirements because it applies only to either cash alone or equity alone. ICS clients may wish to consider adopting a clawback, if they don’t already have one, or reviewing their current clawback policies with the help of their ICS advisor. The reopening of the comment period signals that clawbacks are very much on the agenda for the SEC. Companies would be advised to consider adopting standards that would potentially comply with the final rules. Investors already expect that companies should have robust clawback policies, and whatever the SEC mandates would be a minimum standard for those expectations.